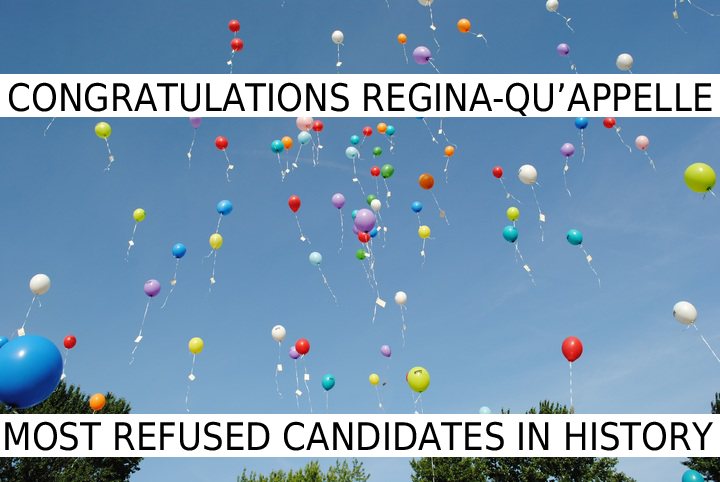 Today the Federal Court threw out our request for the Court to order Elections Canada to add the names of the so called « Qu’Appelle 10 » onto the ballot for the upcoming election.  The court dealt quickly with the matter and the lawyers representing Elections Canada noted the subversive project cooked up to bring the voters living in Andrew Scheer’s Riding of Regina-Qu’Appelle the most candidates in Federal election history.  Still, the Rhino Party and its supporters can be satisfied that it has dared to do what no other political movement has ever been brave enough to attempt before; and in so doing, the Returning Officer for Regina Qu’Appelle set the record for the most candidates ever prohibited from standing for election.

« It was a beautifully chaotic campaign which kicked off on September 26th and morphed into something none of us could ever have imagined.  We had Canadians signing up from all over this huge country to take part in democratic history and get their names on the longest ballot.  When Elections Canada made the bizarre decision of first accepting our nominations and then changing their minds at the last minute and refusing them we thought this was a fight we could win.  We are disappointed the courts have decided otherwise. »

« This decision is a good example of how our justice system is broken.  To refuse to allow 10 candidates to stand for election on a technicality only proves that ordinary people cannot win when their rights are violated.  We need judicial reform in this country so we have a justice system that isn’t just the playground for the pampered and privileged. »

« I can say for sure that few Canadians are satisfied with the archaic and out-of-touch political system Justin Trudeau and Andrew Scheer call a democracy.  People across this country want a system that can address the problems our society is struggling with.  A fair political system would offer more than just an opportunity every 4 years to vote for the lesser evil.  This is why we called on everyday Canadians to participate in the election in a unique and exciting way by standing for election en masse.  Section 3 of the Charter explicitly grants every Canadian the right to stand for election and according to their own website Elections Canada’s mission is Ensuring that Canadians can exercise their democratic rights to vote and be a candidate.  We believe Canadians should only be prevented from standing for election if there is a damn good reason, and no one should be prevented from exercising their rights on what are bureaucratic technicalities.  Despite the setback today, I know I, and everyone else involved with this one of a kind campaign will continue to challenge our broken democracy until the political establishment answers the widespread calls for fundamental democratic reform. »

From all of us involved with this project we would also like to thank again our enthusiastic candidates, volunteers, lawyer, and the 110 people of Regina-Qu’Appelle who let us try out this crazy project by agreeing to nominate any and all candidates who wished to stand in their riding.